1. A far cry from something: very different, almost the opposite

Eg: The movie was good, but it was a far cry from the book it was based on.

2. A close call: a situation in which something bad almost happened.

Eg: I had a close call! A big truck almost hit me!

Eg: I knew all along that Jack wasn’t telling us the whole story.

4. All’s well that ends well: a successful outcome is worth the effort.

5. All of a sudden: something happening quickly, without advance warning.

Eg: It started out to be a beautiful day. Then, all of a sudden, it became cloudy and began to rain.

Eg: Look at Martin he broke the antique vase. He’s all thumbs.

7. As a rule: usually, customarily.

Eg: As a rule I never stay out late on a week night, because I have to get up early the next morning

8. As far as someone is concerned: in one’s opinion/

Eg: As far as I’m concerned, it’s too cold to go swimming this afternoon.

9. As long as: because something else is happening at the same time.

Eg: As long as you’re going to the drugstore anyway, buy me some aspirins.

10. As luck would have it: the way things happened.

Eg: I made good note for my speech, but as luck would have it, I forgot to take them with me.

11. At all: used with negative expressions to give emphasis.

Eg: I’ve read that book, but I didn’t like it at all

Eg: Marry may decide to divorce John. She is at the end of her rope.

13. Bark worse than one’s bite: not as bad tempered as one appears.

Eg: Mr. Hopkins shouts harshly to his students but his student don’t care. The know that his bark is worse than his bite.

14. Be behind the times: not be up-to-date, modern in one’s thinking.

Eg: He’s not a good teacher. He’s behind the times in his methods.

15. Be bent on something: Have a strong desire to do something.

Eg: I told Harry not to drive his car in such bad weather, but he was bent on leaving right away.

16. Be better off: be better on a long-term basis.

Eg: Do you think I’d be better off quitting my present job and going to New York?

17. Spill the beans: reveal a secret.

Eg: Yes, it’s too bad that someone spilled the beans and ruined Harry’s surprise.

18. Spread oneself too thin: become involved in too many activities.

Eg: Although Teresa has always been an excellent student, her marks have been going down lately because she is spreading herself too thin.

19. Stand a chance: have the possibility.

Eg: If he lied to you about one thing, it stands to reason that he’s lie about other things, too.

Eg: The Jungle had danger lurking around every corner. So, Hansel didn’t stick his neck out.

Eg: Even though a number of parliamentarians tried to change his mind, the prime minister stuck to his gun.

22. Straight from the horse’s mouth: from a reliable source.

Eg: You mean Jill told you so herself?

That’s right. I got it straight from the horse’s mouth.

23. Straight from the shoulder: Frankly

Eg: I prefer a person who speaks straight from the shoulder, because then I know exactly what he means.

24. String someone along: lead someone on dishonestly.

Eg: I don’t believe that Liz will marry Dean. She is stringing him along.

Eg: Mrs.Wright takes a dim view of the way her sister is raising her family.

26. Take a stand on something: make a firm decision about something.

Eg: I don’t like the way Tom operates. One day he says one thing and another day he says the opposite. I wish he’d take a stand on something.

27. Take advantage of something: to use something for one’s own benefit.

Eg: Let’s take advantage of this wonderful weather and go to the seashore.

28. Take after someone: resemble in appearance, personality or character.

Eg: Peter takes after his mother in personality and his father in appearance.

29. Take hold of something: take in one’s hands.

Eg: I burned my hand when I took hold of that hot frying pan.

Eg: Steve, you’re working too hard. Sit down and take it easy for a while.

31. Take one’s time do something: slowly, not hurry.

Eg: When you’re eating, it’s important to take your time and chew your food well.

32. Take part in something for granted: assume, without giving it a thought, that something is a certain way.

Eg: Excuse me for not introducing you to Bert I took it for granted that you two know each other.

Eg: In considering Andy for the job, we must take into account that he has very bad eyesight.

34. Take something with a grain of salt: only half believe something someone has said.

Eg: Jack is a very likable fellow, but I’ve learned to take everything he says with a grain of salt.

35. Take steps: prepare for something and put it into action.

Eg: The crime in that city became a serious problem. The police had to take steps to correct it.

36. Take the bull by the horns: take decisive action in difficult situation.

Eg: My sister had been putting off taking guitar lessons, but finally she took the bull by the horns and went to a professional music center.

37. About to: on the point of doing something.

Eg: Tom was about to leave when the telephone rang. 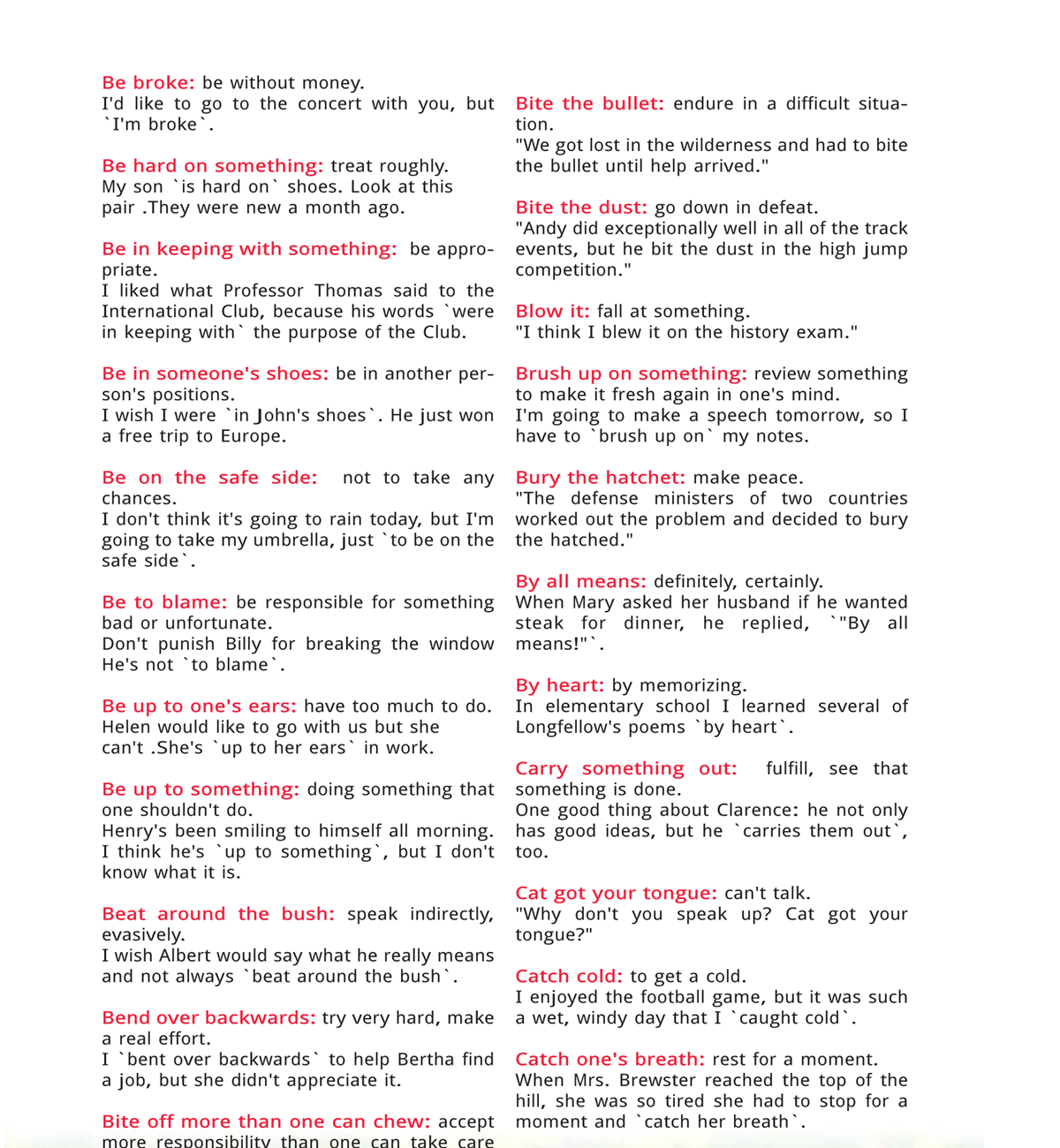 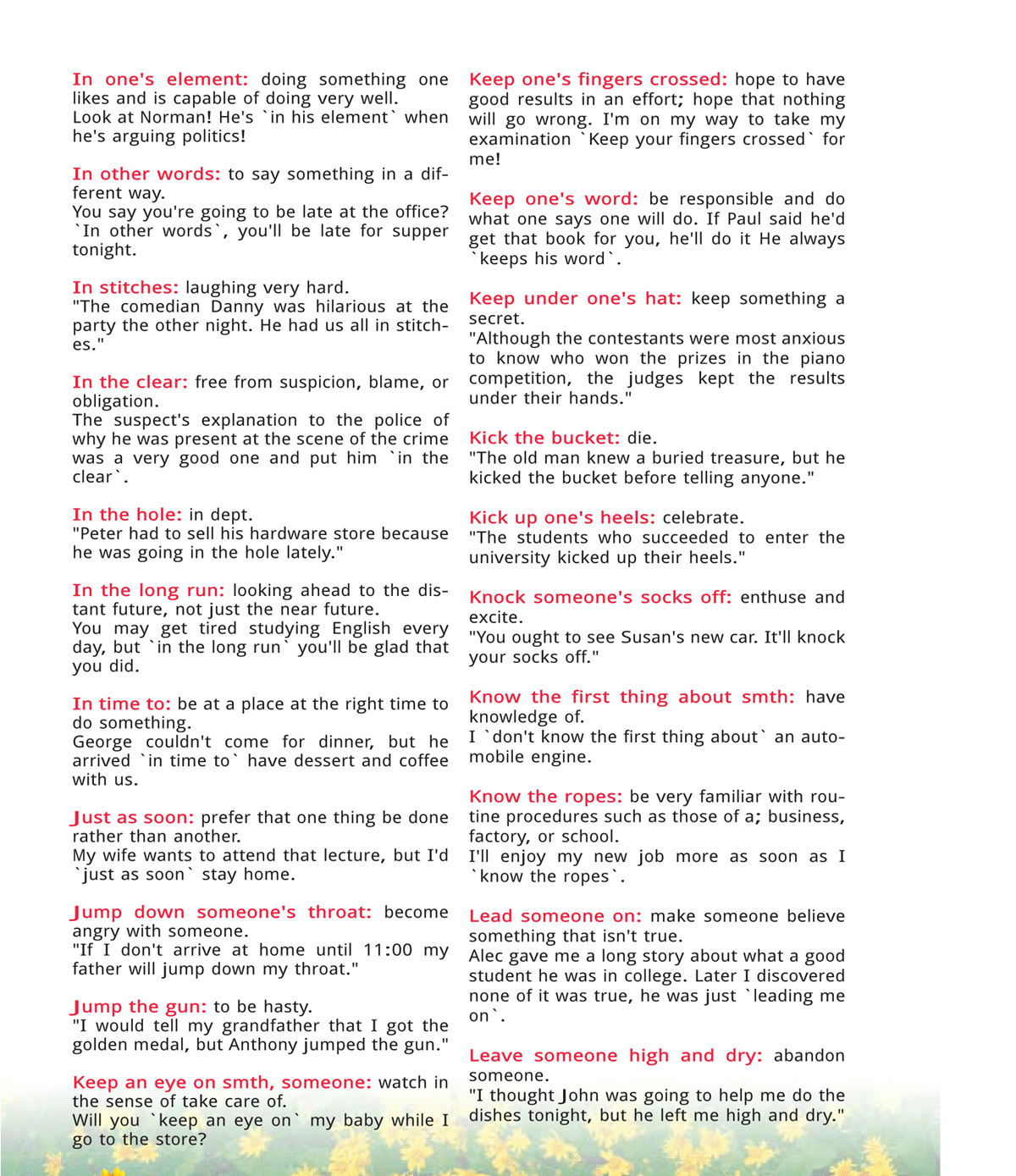 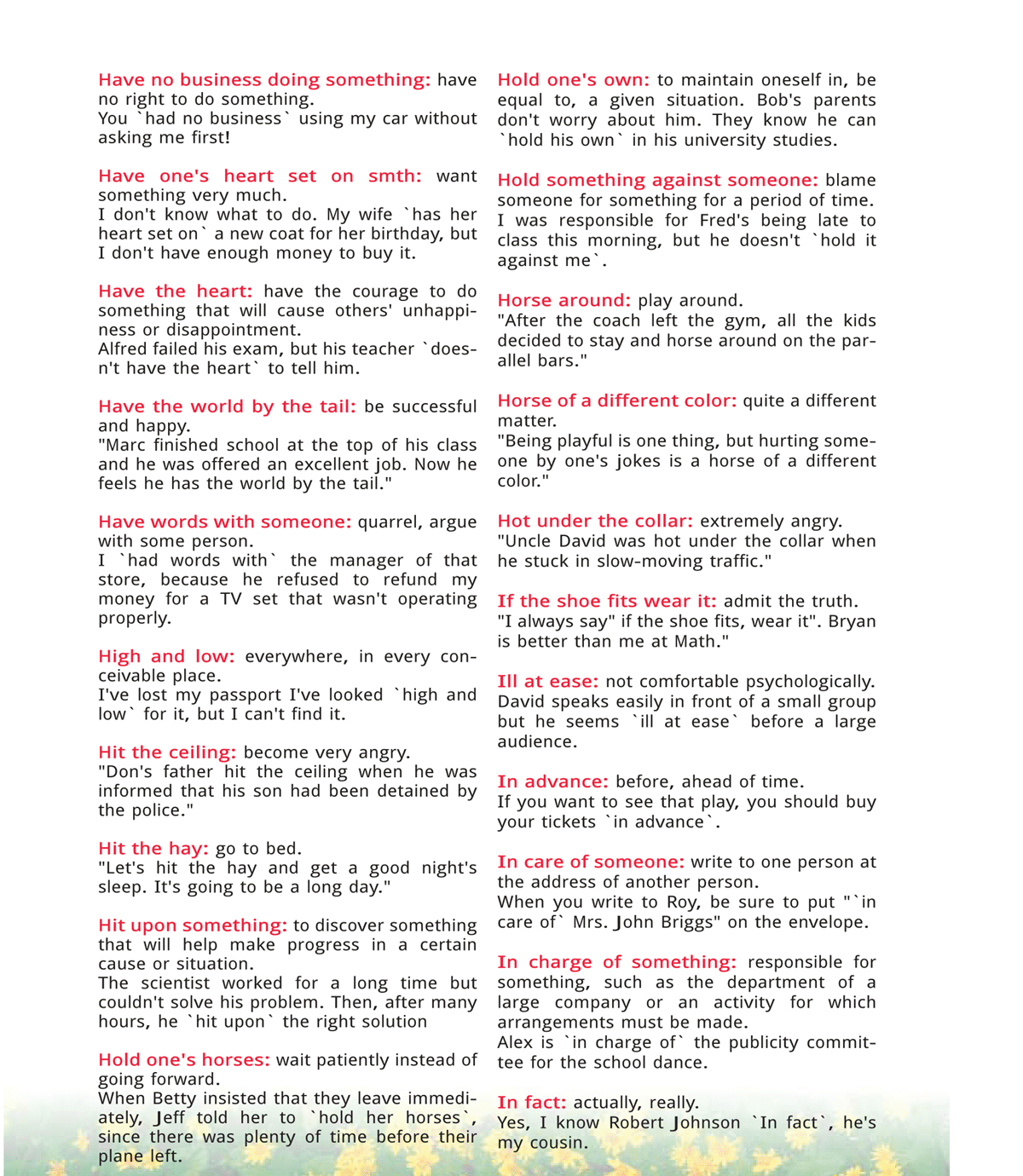 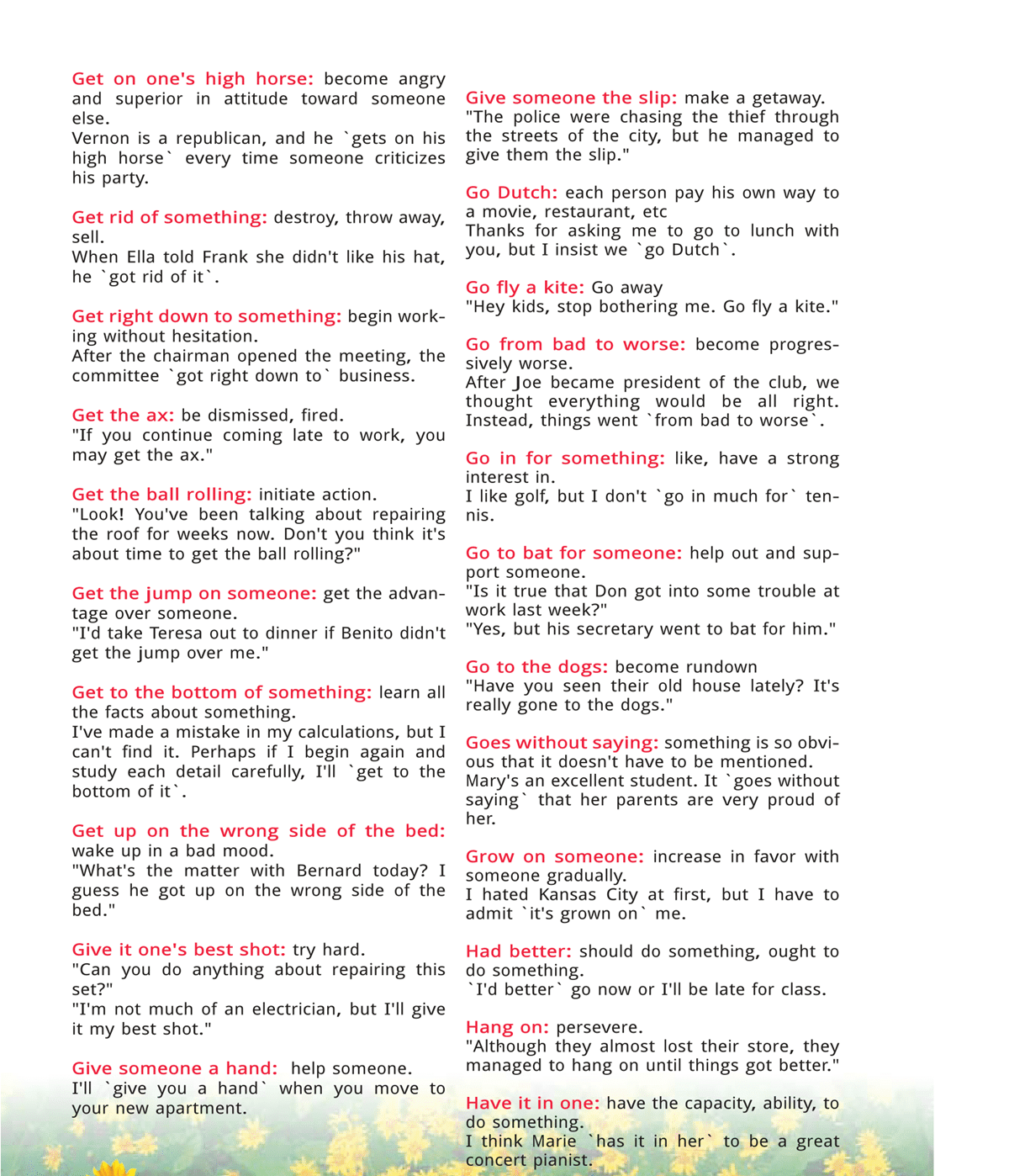 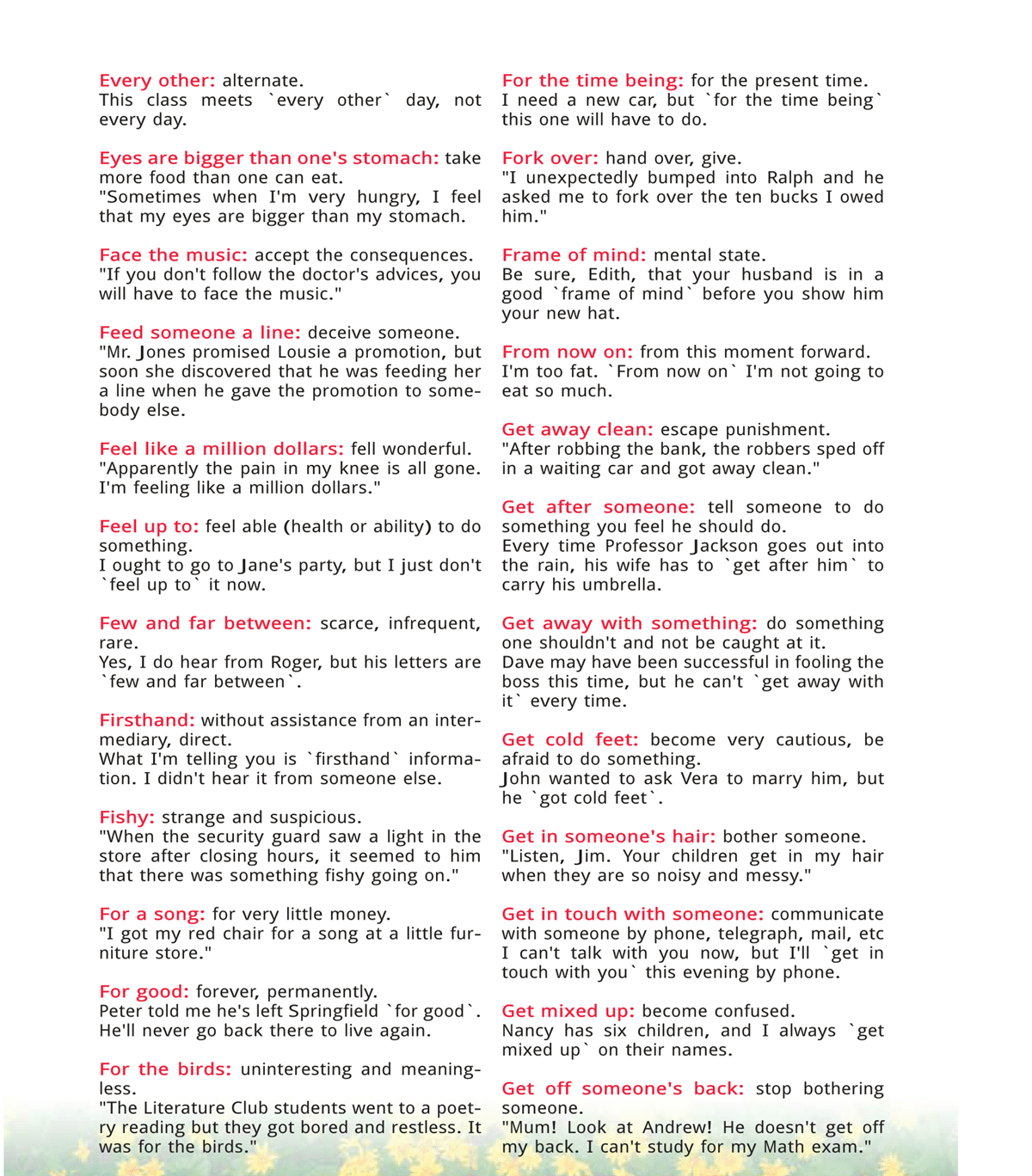 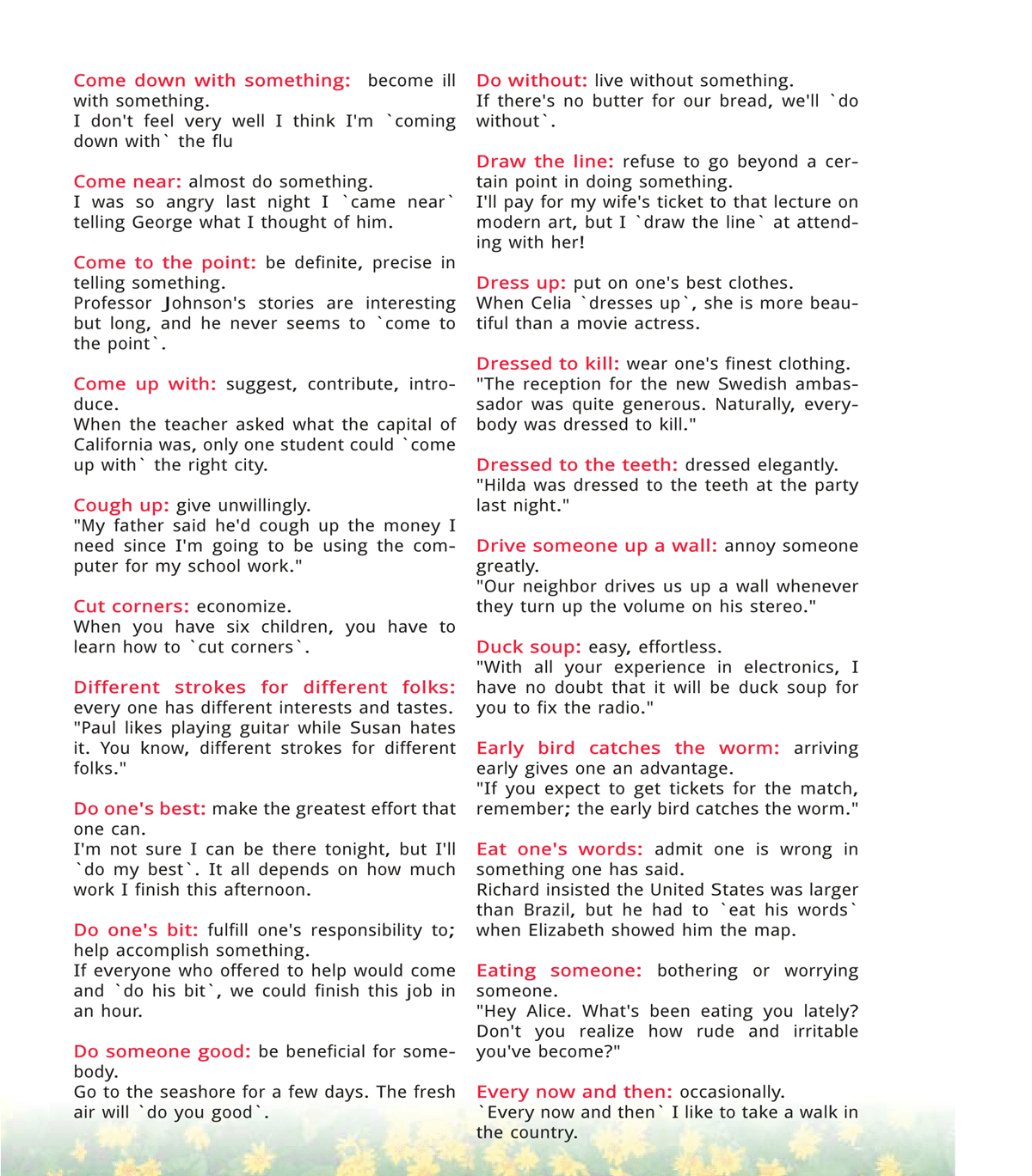